The world of guiding can be very lonely, it’s not for the lack of meeting new people and socializing but having that someone special to remain in your life.

Introducing visitors to the wilds of Africa is a dream job. It can also be an exhausting undertaking because in order to enjoy these remote habitats, it required a great deal of preparation and sufficient logistical supplies. Russ’s luxury mobile safaris not only provided luxury en suite rented accommodation during a journey but a mess tent with tables and chairs, hot water showers and the finest fireside cuisine.

Waking up before the guests, getting coffee on the go and preparing brunch for the morning game drive activity was the start of his daily routine. On a transit day, the entire camp was struck by the camp assistants and relocated to the next venue of the trip.

Russ would then setoff with the travel party in his customized game drive vehicle. The program of wildlife viewing and exploring the national parks and reserves, incorporated the brunch break usually returned to base camp early afternoon. 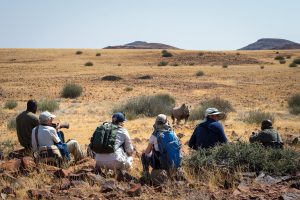 A safari experience with Russ was never about seeing animals in isolation. He related them to each other and explained how they were all part of the big picture of many layers. The more time you spend in the bush honing your skills of observation, the more you get tuned in to recognize the layers.

Identifying animals and studying their behaviour affords a great understanding of territorial displays, courtship, warning signs of aggression, nurturing of young, survival strategies and hunting. The afternoon safari drive always ended up with one of the absolute highlights. A tradition at the end of each day while on Safari is the sundowner. This is a ceremonial toast to the sun going down at a special location. Gin & tonic, other cold drinks and snacks are served, as everyone reflects on the day’s events.

Shortly after sunset, the participants returned to camp. A moment to freshen up and everyone gathers around the fireside for dinner. These legendary feasts prepared on an open fire are sensational. Russ produced healthy three course meals and entertained the guests with stories of the bush and African folk-law.

Some extended programs are up to a month long. There were often times that new guests arrived on the same aircraft as departing guests, with no break for him and his Safari team. The endurance levels were stretched at times but there was always enough passion and energy to share with the new comers.

Acquaintances were made, resupplies checked and with everyone aboard, off they went on their next adventure. So many people got to see Africa through Russ the ambassador.

The quaint little seaside village of Kommetjie was Russ’s home. It was here that spent time between safari seasons. 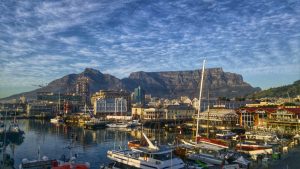 This is an equally beautiful part of the world close to Cape Town. The beautiful natural surrounds of pristine coastline with a protected cove, stepped rocky ridges with expansive kelp forests and vast white beaches and lagoons, franked by Cape Fold Mountains.

The area is a naturalists dream. Russ lived a very active life walking the whole shoreline at daybreak and volunteering the rest of his time to local conservation and helping the disadvantaged local communities in Ocean View and Masiphumelele.

He was a founding member of the environmental group KEAG. They built an environmental centre for recycling, permaculture workshops, teaching conservation to the youth and empowering the poor. The philosophy was built on the reality, that if our local community’s home environment was healthy and the standard of living could be improved, our natural environment would be spared. Many of the projects involved clean-ups, tree planting, clearing invasive plants and protecting the area from unscrupulous developers.

The role of the NGO was critical at a time where there wasn’t any official authority to protect the Cape Peninsula. Russ and his fellow volunteers played a huge role until South African National Parks took on the management of the environment when the Table Mountain National Park was established.

The Birth of Greenlife

It was during this time that Russ started Greenlife Eco Tours. He initially offered day tours of the Cape of Good Hope Reserve, Boulders Penguins when the colony first started with two breeding pairs, interpretive walks in Kirstenbosch Botanical Gardens and hikes on Table Mountain.

Getting established as a tour operator was very difficult under testing political times. It was a time of great uncertainty with the change of guard between the old apartheid order and the budding new democracy. South Africa was in the international press for all the negative propaganda and many of our guests cancelled their trips in response.

Russ’s time was taken up with freelance Safaris, Cape tours and voluntary work. His Kommetjie friends often asked when he would find a young lady and consider settling down. He would laugh at the thought and replied that one day that lady would arrive at my door.

On the 10 of May 1994, South Africa inaugurated its first democratically elected president. Nelson Mandela brought a wave of confidence and goodwill to the whole region. The spotlight was on a country with rich diversity and scenic beauty. The destination laid claim to the welcoming title of “rainbow nation” to describe its flamboyant people and vibrant landscape.

Time went by, and one early morning after a big winter storm in June 1994, a large floating crane barge broke its tow and wrecked near Hout Bay. The BOS 400 broke up on the pounding shore with most of the thick hardwood deck beams being cast off. It was Russ’s good fortune to be the first to discover them washed ashore on Noordhoek Beach.
He immediately ran up to the closest farmhouse at Imhoff’s Gift and negotiated with the farmer for the use of his tractor and trailer. Together with the help of a few members of the local community, they loaded more than fifty hefty iroko timber beams.

This salvage effort resulted in fortunes worth of wood which he shared with his helpers and sold.
It was then, with some capital in hand that the prospect of traveling to Europe to promote Greenlife was realized. His idea to blend his Safaris with a stay in Cape Town would combine his two areas of expertise.

So in July 1994, Russ went off to Vienna to market Greenlife Africa Safaris. He had his best safari outfit and really looked the part of an African bush guide. Little did he realize, not being to familiar with European business etiquette he was to discover how formal it was and one’s image was important. Looking the part of a safari Guide in Vienna was a total flop and nothing came of the chance to market our African travel services.

The visit to Vienna was a real eye opener and inspired Russ. The incredible architecture, classical music, fine art and museums exposed him to the rich culture of Europe which he was eager to explore and make the most of the rest of his stay.

One place in particular was the Rathausplatz which was a popular summertime evening venue for street markets and open-air big screen classic concerts and film festivals. It was here that Russ first set eyes on Marion. There was something about her that completely captivated him. She disappeared into the crowd and every attempt to find her again on that first evening was in vain.

The next day he was back to the venue with nothing more in his mind than to find her and make her acquaintance. Unfortunately, she was too popular and social to find the right moment to make his introduction.Before the third evening at the Rathausplatz and the final day of his stay in Austria, he wrote a postcard to his friends in Kommetjie.

He specifically mentioned seeing the woman of his dreams and not finding the chance to talk to her. As successful as he was at tracking her, he was unsuccessful at drawing her attention and he departed for Africa without even knowing her name.

So it was back to his routine of freelance safari journeys alternating with time in Cape Town. At the beginning of January 1995, Russ got to meet a young Austrian doctor who travelled to South Africa to do his internship at a leading teaching hospital in Cape Town. He was originally inspired by the work of the great Albert Schweitzer, a tropical medicine physician who transformed health care in Africa.

The two soon became very good friends, spending a great deal of time hiking and fishing in their spare time. Living in doctors residence at Tygerberg Hospital had its limitations and Stefan grabbed every opportunity he could to head out to Kommetjie and spend time in the beautiful surroundings.

Four months after his arrival, he raised the subject of his sister coming out to visit and that she would need a place to stay. Suddenly Russ was faced with the daunting responsibility of looking after a young lady for the next few weeks, but he reluctantly agreed.

Meanwhile his sister travelled to South Africa with a feeling that she was going home. It all seemed so familiar, including the spirit of the children on the aircraft traveling back from Europe. Stefan must have had a big role in her fascination of Cape Town, after him sharing his experiences and adventures with his South African friend. You can imagine the surprise on Russ’s face when Stefan arrived at his house with that beautiful young lady, the very one that stole his heart almost 10 months before in Vienna.

And so Russ and Marion were finally together and the beautiful story continued. A year later they were married and settled in the beautiful village of Scarborough, adjacent to the Cape of Good Hope Nature Reserve. Russ and Marion worked together to build up Greenlife Africa Safaris and raised two beautiful daughters. They also nurtured many local children from impoverished circumstances and provided as much support and education opportunities for these young lives, all made possible with the generous assistance of Greenlife travellers.

Marion eventually reignited her calling to be a healer and furthered her classic medical doctor training with a six year study of homeopathy and complimentary medicine. From time to time Russ and Marion still lead travel programs together. Her very successful integrative health care practice demands the majority of her time. Her genuine interest in her patient’s wellbeing has resulted in an overwhelming need for her care in world of challenging health treats.

Russ continues with his role at the helm of Greenlife Africa Safaris. He still personally leads Safaris and Journeys throughout Southern and East Africa. He is also available to Guide private day trips in Cape Town and surrounds. He is also involved with making wine and can share a personalized perspective of the Cape Wine industry.

Besides his role in travel and hospitality, Russ is the director of an environmental centre which exposes children to the environment and teaches them about conservation. He strongly believes in building the capacity of young local entrepreneurs to get involved in travel and tourism. The future of our natural resources and wilderness can only survive when all role players see the benefit and can participate in the tourism industry.